Our old house was on a dead-end street, a nice long quiet road with trees and kids and people who mostly observed the speed limit. For the longest time, when I drove in and out of our neighborhood, I’d see a teenaged boy practicing skateboard tricks—or rather the same trick—over and over. 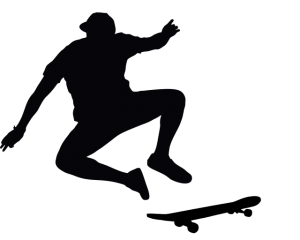 But he didn’t give up and eventually I saw him nail the move. It didn’t happen overnight. It was a gradual process. Instead of succeeding once in a hundred times, it would be one in ten, and then, finally, most of the time, he’d jump and spin and pick up his board. Smile.

And practice it again.

After a while, he’d start on a new skill, a new trick. And fail miserably.

I can’t count the number of times I thought, a girl would never do that.

Not the practicing and the striving, but the public failure. Repeated failure. Where everyone could see them mess up and sprawl all over the pavement or the lawn and look like a dork.

I hadn’t thought about that kid in years, but a recent post brought it crashing back.

Basically, Hugo talked about the tragic suicide of a teen, Amanda Todd, following severe harassment after Todd’s decision to ‘sext’ a man who, it turns out, may have been a predator. Allegedly, this man tried to blackmail her and released the pictures to her classmates and life took a horrible turn for Ms. Todd. More horribly, she didn’t see a way out.

Unfortunately, Todd’s story has been hijacked and trotted out as a warning to girls about the danger of stepping ‘out of line’ with anything sexual, another ridiculous blame the victim measure. While the article initially focused on sexuality, what is most concerning to me is the way the ‘messing up your life’ message demands perfection from young—and not so young—women, while at the same time forbidding them to experiment or risk failure. As I told Nicole in our Facebook exchange, this is the broader message for me:

[Resilience and the ability to thrive] means focusing on giving them what we’ve given their brothers for decades: the chance to see failure –- and even humiliation -– as an opportunity rather than as a life-destroying disaster.

I kept thinking about the implications of this message, this demand for instant perfection, on creativity. Whatever the media—visual through paint, photography, glass, fiber; performance in dance or theater; or the written word—taking a chance, risking failure if you will, is inherent in creative works. As much as we try to say, “writing is a business” or “once we finish, it’s a product,” the end result of our creative endeavor is still a piece of our soul.

And we offer it up to the world to critique.

If we aren’t “allowed” to take risks, to risk failure, if we have to be “perfect” before we attempt…anything, what does that say about us as a society? If we all have to fall in line and not push creative boundaries, there won’t be urban fantasies or paranormal entities or mysteries that make us think, not just about who did the crime, but what led those characters to make those decisions or any of the other layers we authors craft into our stories to make us think outside the expected. Outside the safe.

And failure to take the creative risk is a loss for all of us.

I don’t want to live in a white bread world, where everything is the same. Where people are afraid to take risks. Are afraid to challenge their deepest fears and embrace their highest dreams.

PS – I have a Book releasing in June, Calling for the Money. The original inspiration for it was a different news article about the suicide of a lonely veteran caught in a sexting scheme. The internet is a useful tool, but the anonymous predators deserve a special place in hell.