I wrote this for our group blog in 2017, but Brock Turner was the first person I thought about when I saw the unbelievably lenient sentence Paul Manafort received. Disparity in sentencing is not justice and is simply wrong. 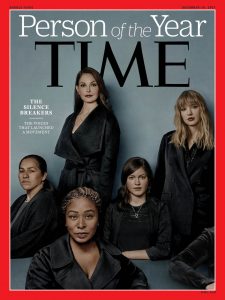 You saw the Times cover for the Person(s) of the Year, right?

Maybe people are starting to hear the voices of women who have for years (and years) been wrestling with sexual harassment and assault.

Maybe it’s not being heard, if the players aren’t high profile in every day life.

Case in point: Did you see that Brock Turner is appealing his conviction?

You remember Brock, right? The Stanford University swimmer convicted of three (count ‘em, three) felonies (which normally carries a sentence of up to fourteen years) who was sentenced to a whopping six months and released after serving only three months in a county jail (instead of prison).

In his appeal, Brock claims he didn’t get a fair trial for the following reasons:

1) The defense team, the one Mommy and Daddy paid for (You remember Dad and his infamous reaction: his son should not go to jail or have his life ruined for “20 minutes of action”) didn’t get to put characters witnesses on the stand to say what a great guy he is.

The great guy who found an unconscious woman outside on the ground and instead of calling for help, sexually assaulted her.

2) The prosecutor repeated used the word “Dumpster.” The defense says this “implied moral depravity, callousness, and culpability on the appellant’s part because of the inherent connotations of filth, garbage, detritus and criminal activity frequently generally associated with Dumpsters.”

I suspect the Dumpster makers didn’t appreciate that characterization.

In Brock case, the victim and “Mr. Turner” were found “in a three-sided structure that customarily houses”…wait for it… “a Dumpster.” They were discovered on the open side, facing a darkened basketball court, which by the way is where the prosecutor said the assault occurred. In the open.

Brock – hint – that big green box, the one usually housed in that structure, is called a Dumpster.

And you assaulted a woman in the open area in front of that structure.

3) Brock claims it was consensual sex.

Two graduate students caught him assaulting the UNCONSCIOUS woman and tackled him when he tried to run away.

Really hard to give consent when you’re UNCONSCIOUS.

And those two grad students made really good witnesses for the prosecutor since they caught him in the act.

4) And incredibly (as if the above isn’t already incredulous) 60 pages (yes SIXTY) of the appeal focus on how much the VICTIM drank that night.

‘Cause in Predator Land, it always the victim’s fault.

And you always blame the victim.

Live with it Brock.

The impact statement (which is incredibly powerful)  https://www.theguardian.com/us-news/2016/jun/06/stanford-sexual-assault-case-victim-impact-statement-in-full