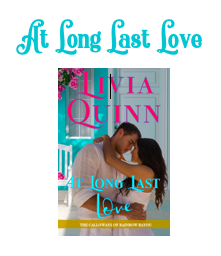 Book 5 in the Calloways of Rainbow Bayou released on 10/15. When I was considering titles for the books, this one came to me right off and never changed because of what this couple has gone through to get their happy ever-after.

Some authors plot out their story line and know their characters ahead of time. That is so not me. Sometime I go to the tub for my morning writing time and I have no idea what’s going to happen in the scene. Sorry if this is TMI but as soon as my skin hits the water, I’m writing and the words don’t stop until the water is cold. The thing is, my characters follow me. I can almost close my eyes and envision them sitting on the edge of the tub, legs crossed, head back on a comfy mini lounge chair as they recount what happens.

When I was writing the first Christmas book and Beau and Maddie had their little “reunion” moment, let me tell you I was shocked. And I cried. After that, readers began requesting their story.

Madison Hart has been in love with Ducane Beauregard Larue for most of her life. But when a Hollywood movie stunt-gone-wrong sends Beau home a changed man, Madison’s heart leaps at the thought of a second chance. After her sacrifice pushes him away, will her love be strong enough for both of them?

Inside the helicopter, Beau Larue drifted in and out of consciousness, the pain bringing him back each time as he remembered the accident.

He’d pushed the lever forward and watched as the larger craft turned to the right. As planned, Beau turned his boat hard in the opposite direction supposedly in the driver’s blind spot and as choreographed the larger boat was suddenly facing Beau’s boat.

As scripted, he’d raised his gun, aimed at the pilot of the other boat and fired. The boat kept coming. That wasn’t right. The actor was supposed to veer sharply as if dodging the gunfire. With a flash of sudden clarity, Beau realized his long held opinion that he wouldn’t live to see thirty-five, was about to come true but not for the reason he’d expected.

Like a movie of his own life, scenes flashed in his head as he jerked his hand on the wheel—Grandpa Earl telling him he was proud of him during a day on the bayou behind the old farmhouse in Louisiana; his Aunt Vic (Commander Larue to everyone else) hugging him as he left home for Hollywood; the high school seniors he’d spoken to yesterday dressed as Navy Seal Ian Stone about a military career. And Maddie…his lovely Maddie.

As her face filled his vision he thought he’d successfully avoided the other craft, but then, surprised, he saw the problem. The other actor, an experienced stuntman as well, was slumped across the wheel of his boat, then the long bow slammed into the starboard hull of Beau’s and pain and the grinding of metal and fiberglass was the last thing he heard.

There were noises after a time, helicopter rotors, boat engines, people shouting, someone splashing in the water nearby. He couldn’t make out the words. He was floating or lying atop the waves, something keeping him afloat. Shut up, his mind screamed. What were they yelling about? Didn’t they know he was ready to go? He’d known this was going to happen all his life. Just let me rest. A strong arm grabbed him from behind and pain exploded in his leg. He screamed.

A steady voice in his ear said, “Easy, I’ve got you. We’ll have you taken care of shortly, sir.” Beau opened his eyes to see a young man’s face in an orange helmet and wet suit looking down at him. His fuzzy thoughts couldn’t connect the man’s presence with what was happening around him. He smelled smoke and something coppery and nearly gagged on the strong gas fumes that permeated the air.

A shout reached his ears, “We found the other man! He’s alive, for now.”

Someone else had called, “Keep an eye out—”

Beau couldn’t make sense of any of it. It was just too damn hard to stay awake and he was so cold. “C-ccold,” he whispered but no one came.

As he closed his eyes he heard gears grinding smoothly overhead and felt a swaying movement as several hands landed on him. Someone cursed and another booming voice made him want to put his hands over his ears, “Keep searching for that boot!” Beau winced.

Another voice. “Jesus, this is bad.”

Buy link for all stores:

The first book in this series, When the Right One Comes Along is $0.99 https://books2read.com/whentheright1

Livia Quinn is a DC native living on the bayou in Louisiana. Her characters and settings have been inspired by the lush beauty and interesting culture of the area. She’s written fifteen books based around her fictional Storm Lake, the Destiny Paramortals (paranormal) and the Calloways of Rainbow Bayou, a small town contemporary romance series.

Connect with her in your favorite way: