Who else loves to travel?

We just returned from Southeast Asia. I’m not sure if this was a bucket list trip or simply an area of the world we were curious about. Both my husband and I were too young for what we call the Vietnam War, but I remember the protests and the horrors of the war shown on the nightly news. Soldiers being spit on and called “Baby Killers.” The MIA bracelets. Four Dead in Ohio. (My blogmate’s books are set in the era, by the way.) The guys in the deli where I worked during college with their bravissimo: “I was stoned the whole time,” and our church youth advisor, a then, newly-minted lieutenant, who would not talk about his time in Vietnam. My brother-in-law, a medic during the war, who also does not discuss his experiences there.

I could go on, but I think you get the drift. Or maybe you remember.

Then there’s Cambodia. A close friend’s daughter served there with the Peace Corp and kept me intrigued with a running series of Facebook posts. And who isn’t moved by the atrocities committed by the Khmer Rouge? 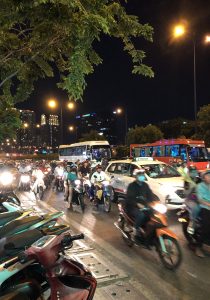 And we loved Saigon.

The locals call District 1, which is the old town, “Saigon” while the sprawling city is referred to as Ho Chi Min City. There’s energy and optimism, friendly people, and 6 million scooters (mostly being driven by young, texting locals). 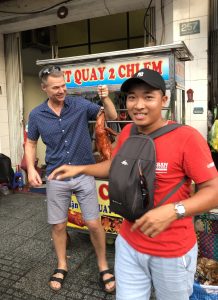 One of the things we did was a street food tour – vendors set up, legally or not so much, wherever there’s an open spot of pavement. Hygiene may be optional for some of those vendors. 😉

Our guide for the tour said Saigon is in to “Capitalistic Communism.” They relate to Cuba, consider Russia a socialist country, and think North Korea is a disgrace. By the way, they still don’t like the Chinese, even as China pours investment money into the country, and the French… well…the south doesn’t hate them as much as the north. But you know, we never ran into anyone who openly disliked Americans. Instead they all wanted to practice their English on us.

Although the War Remnants Museum, chronicling the “American War,” was a sobering reminder of what a horrible war this was for both sides. 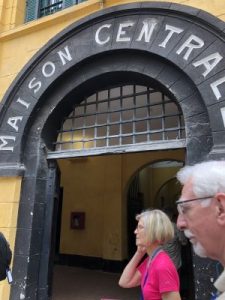 We worked our way north with stops in Hanoi where we checked out the Hanoi Hilton and learned it was a massive torture prison built by the French (see “they hate the French” above, along with the 95 years of French oppression).

Ironically enough, the Vietnamese have huge respect for John McCain and his decision to stay with his men rather than using name and position to bail himself out. (cough, cough, bone spurs.)

But damn, the coffee and cheese were French and amazing.

We found the north more political and less entrepreneurial than the south. Interesting differences in culture.

Then it was on to Halong Bay, which was awe inspiring. Seriously. I thought it would be water, a small bay, with a few of those rock monoliths. A picture may be worth a few words here. 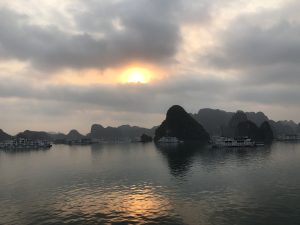 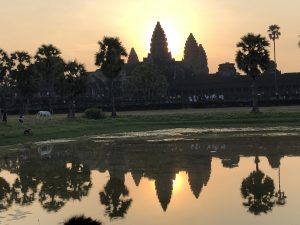 We traveled on, through Cambodia and down the Mekong, back to Vietnam.

So many glimpses of a different lifestyle. A third world country struggling to move ahead. Pride in the remnants of a kingdom in the past. Something beyond tolerance for the religious practices embodied by hundreds of temples. The quiet serenity of sunrise at Angkor Watt. 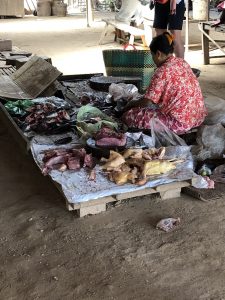 Terrifying safety issues in manufacturing. Yes, she’s hand feeding reeds into that machine, which snatches them from her fingers and zips the shuttle back across the machine.

Health and hygiene issues that made us cringe and wonder why we obsess over plastic straws. 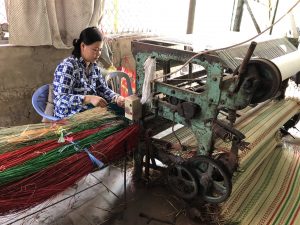 The sadness of the long-term impact of the Khmer wiping out every person in the country who could read and write and the current struggle of the Cambodians to find their footing.

The search for foreign investment in the face of those struggles. Quiet disdain for the puppet government put in place by the Vietnamese, who also installed 8 million landmines to keep the Khmer out of Vietnam. (There are roughly 4 million mines still hidden in the ground. They pay children $1 for each turned in mine – people also use the explosives to blast fish in ponds, but that’s a separate story – and many bear the missing feet and hands as a sickening reminder of how dangerous those devices are.)

What can a writer learn?

A sensory overload? That iced Vietnamese coffee is wonderful? An appreciation for friends and a zest for life? A sobering realization three generations of Vietnamese live in an area roughly the size of my living room. An appreciation for air conditioning. (I grew up in the South and yeah, Robin Williams had it right. Vietnamese weather? Hot and damn hot.)

Maybe it’s getting outside our own heads for a while. Trying new things. New experiences. Learning about a new-to-me ancient culture. Meeting new friends and recapturing a curiosity about the rest of the world.

Whatever you want to call it, I’m glad I went. And I’m already eyeing another area of the globe…

What the most interesting place you’ve visited lately?