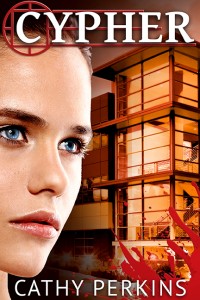 “Office romance” conjures up images of an assistant – usually the heroine – walking into the corner office to takes notes for either an unrequited love interest or a crusty/pompous/ice-cold guy who’s going to actually have a heart of gold. A wee bit outdated, wouldn’t you say? Today, the roles are likely to reverse (anyone else love The Proposal?) with a female executive leading the company and the notes may be via IM, while the lovers hope the company isn’t logging keystrokes.

When I started playing with ideas for CYPHER, my latest release, I thought, What if?

What if I turned the idea of an office romance completely on its head? What if instead of a person at the office, it was the company itself that everyone wanted? Although Caroline (Cara) Wainwright says she’s perfectly happy working for the advertising agency, what if she really wanted to work for the family business like her brother, if only to snag her father’s attention? The rest of the “what ifs” about Cypher, the family’s corporation, might give away plot twists, but from the beginning, Cara wonders: since her father has always made the business a higher priority than his family, how far will he go to protect it?

With Cara pulling on family dynamics inside Cypher, Detective Davis Morris can push from the outside, tying together pieces of forensic evidence. He’s also falling for Cara, which makes him wonder if their attraction is desire, manipulation…or real. Talk about your personal conflict! David is investigating the murder of Cara’s friends—with everyone in her family hiding secrets and on the suspect list, including Cara. Unless they overcome their distrust and work together, more people will die.

I love it when the stakes are higher because the hero and heroine stand to lose both personally and professionally.

I had a lot of fun writing CYPHER. It’s been tagged, A twisty mystery with a compelling romance.

What is your favorite romance trope? Are you a traditionalist or do you prefer stories that take the trope in a new direction?

Excerpt:
In this section, against her attorney’s instructions, Cara Wainwright has arranged to meet Detective David Morris at the hospital where her terminally ill mother is a patient. Newspaper coverage speculating about her murdered friends and Cara’s role in their death prompted her to give him a different perspective on all of them. Through his investigation into Cara’s life and personality, David is already fighting his attraction to her. He doesn’t know if she’s the murderer, a co-conspirator—or innocent.

Before Morris could ask [Caroline] to explain the “error in judgment” or prod her about Reese’s drugs, she said, “There may be another possibility.”
“Oh?” His attention immediately sharpened. They’d already covered his primary motives.
Her fingers drummed the table. “As far as I know, no one hates me. My family has money, but most of it’s tied up in Cypher. The company’s never been an active target before.”
“Is something different this time? Have there been threats?”
“I’m not aware of any.”
She was hedging. “Anything from a disgruntled employee?”
“It’s just a feeling. That something’s going on. With the company.”
He found himself in the uncomfortable position of pulling a Pennell. He couldn’t take her instincts to court. He needed something solid. “You aren’t involved in the company?”
Caroline shook her head. He tried to focus on the subtext of her words rather than her perfume and the way her chest rose and fell sharply when she tried not to cry.
“It was a mutual decision. I enjoy my work with Robeshaw Advertising. I called Crystal earlier today. She said the police were there. Was that you?”
He wasn’t going to let her off that easily. “I could talk to your father about threats to the company.”
Her body language said, Good luck with that one.
The corner of his mouth twitched. “Already tried that, huh?”
“He’s big on Need to Know.”
“What about you?” He tried to say it neutrally. He didn’t want to be attracted to her, but he wasn’t looking forward to hearing about her love life either.
“Me? I’ve already told you, nobody’s threatened me.”
“This could be directed at you personally rather than your family. Maybe an old boyfriend?”
She recoiled as if he’d slapped her. “Bill would never—”
“If it is directed at you,” he interrupted, “the guy could try again. We need to consider the possibility.”
For a long moment, she stared at him. Then she released a slow breath and relaxed her shoulders. “You can take my old boyfriends off your suspect list.” A wry expression twitched her mouth. “I can think of one guy who broke my heart back in college, but I didn’t exactly leave a trail of crushed men in my wake.”
Don’t sell yourself short.